Revelations and Translations, Volume 4: Book of Abraham and Related Manuscripts 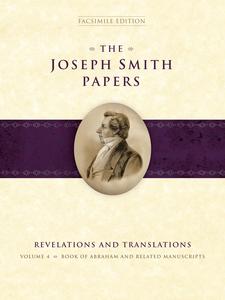 The fourth volume in the Revelations and Translations series, to be published in 2018, includes three sets of documents: (1) the extant fragments of the papyri purchased by Joseph Smith and others in 1835; (2) the documents that collectively compose the “Egyptian-language documents,” which are associated with the attempt by Joseph Smith and his associates to decipher hieroglyphic and hieratic characters from the papyri; and (3) the various manuscripts and first print publication of the Book of Abraham text.

This facsimile edition presents full-color photographs of all these documents, with corresponding transcripts of the English text. With this unprecedented access, scholars will gain a better understanding of the physical remnants of Joseph Smith’s translation process. The introductory material situates Smith’s efforts in the broader context of the nineteenth-century fascination with Egyptian history and culture, of his own effort to reveal truths from the ancient past, and of his other translation efforts. The annotation in this volume explores the relationships between and among the various manuscripts. For readers interested in the textual history of the Book of Abraham, the translation process of Joseph Smith, or the way in which nineteenth-century Americans viewed Egyptian papyri, this volume’s offerings will be invaluable.

Robin Scott Jensen is a historian for the Church History Department, The Church of Jesus Christ of Latter-day Saints. Brian M. Hauglid is an associate professor of ancient scripture at Brigham Young University.

In 1835 a man named Michael Chandler arrived in Kirtland, Ohio, and sought an audience with Joseph Smith. Chandler had been traveling throughout the United States, exhibiting a collection of mummies and ancient Egyptian papyri that had been unearthed near Luxor, Egypt. By the time he reached Kirtland, he had sold most of the collection but still had in his possession four mummies, two papyrus scrolls, and additional papyrus fragments. Joseph Smith inspected the artifacts shortly after Chandler arrived, and soon thereafter, Smith and some of his associates purchased them all for the price of $2,400.

Like many of his contemporaries, Joseph Smith viewed Egyptian artifacts with deep interest, wondering what knowledge they might contain about the ancient world, biblical narratives, and divine truths. Soon after purchasing the mummies and papyri, Smith and his associates set about attempting to decipher the Egyptian language by proposing linguistic rules and dissecting individual characters. Around the same time, Smith also dictated to his clerks a first-person account of the biblical prophet Abraham, which Smith said was a translation of the writing on the papyri in his possession. The account, which came to be known as the Book of Abraham, presents a narrative of Abraham’s journey from Ur to Egypt, a description of his activities in Egypt, an account of the creation of the world, and doctrinal teachings on topics such as the eternal nature and premortal existence of spirits and the plan for a Savior for humankind.

Seven years after the initial purchase of papyri, Joseph Smith translated additional material from the Book of Abraham and published all that he is known to have translated, along with three illustrations from the ancient documents, in the church newspaper Times and Seasons. Joseph Smith preached doctrines contained in the Book of Abraham both before and after its publication, and the ideas contained in it clearly influenced his theological thought. Members of the Church of Jesus Christ of Latter-day Saints viewed the Book of Abraham as a witness of Joseph Smith’s prophetic gift and a continuation of his pattern of revealing sacred texts, including the Book of Mormon, the inspired revision of the Bible, and his many revelations. Wilford Woodruff, a member of the Quorum of the Twelve Apostles, stated in 1842 that “the Lord is Blessing Joseph with Power to reveal the mysteries of the kingdom of God; to translate through the Urim & Thummim Ancient records & Hyeroglyphics . . . which causes our hearts to burn within us while we behold their glorious truths opened unto us.” While Joseph Smith’s work on the Egyptian language and the Book of Abraham does not comport with a modern scholarly approach to translation, Woodruff and other Latter-day Saints viewed the creation of the Book of Abraham text as a revelatory process rather than an academic one.

“In their editorial commentary, Jensen and Hauglid successfully avoid speculative theories and allow the material to speak for itself. . . . In sum, volume 4 of The Joseph Smith Papers, Revelations and Translation series, Book of Abraham and Related Transcripts, is an extraordinary scholarly accomplishment. The editors are to be praised for their impressive handling and publication of this fascinating material that opens the door to not only Smith’s Book of Abraham, but also the revelatory process Smith and his associates used to create religious texts.”

“As with the other facsimile volumes of the project, it is a physically handsome, high quality production: durable, easy to use, and easy to read. . . . It does superbly what it sets out to do: give the reader easy access to the constellation of documents circulating around the Book of Abraham and Smith’s work with ancient languages. . . . This volume is a treasure trove of information about the Book of Abraham; the construction and content of early Mormon cosmology, anthropology, and theology; and the nature of revelation in the early Mormon community. It is a most welcome addition to the scholarly conversation.”

“Among other helpful aids, the frontmatter of Revelations, Volume 4 includes an introduction that is insightful and succinct while avoiding many of the polemical stances that have come to characterize book of Abraham research.”

“The scholarship that went into the production of this volume achieves the highest standards the discipline can aspire to, something we have come to expect from the Joseph Smith Papers team. . . . This book is the high-water mark in book of Abraham studies.

“I must acknowledge that I was prepared to be let down by this volume, mostly because of the rather fractious debates that exist in book of Abraham research. I was pleasantly surprised to see that the authors found a way to acknowledge the entire academic community that has previously worked on this important text.”

“This was one of the most highly anticipated volumes in the JSPP, and now that it’s here I am more impressed by the volume than I expected—yes, I expected high production values, clear printing and great references, but I was especially excited by the thoughtful introduction and explanatory notes throughout the volume. I believe the content here, and the introduction to this volume, in particular its discussion of what ‘translation’ means, makes this volume perhaps the most important book published by the church in decades. . . . Vol 4 is an unparalleled documentary source.”

“I don’t think any Latter-day Saint or other interested party should pass up the opportunity to get hold of the recently published (and utterly beautiful) volume in the Joseph Smith Papers Revelations and Translation series (vol. 4). . . . This Facsimile Edition is a tool for scholars and others interested in the Book of Abraham to do things like theological work or ferreting out textual influences or constructing arguments over and about the text and early Mormonism.”