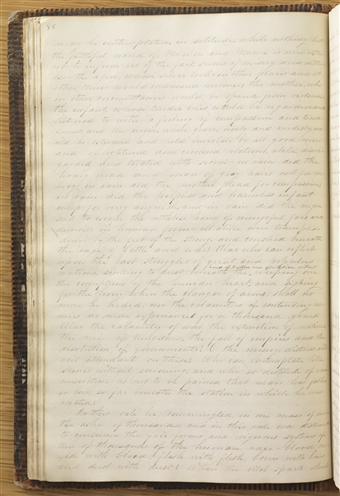 may be contemplated, in solitude, while nothing but the faithful record of Mormon and Moroni is now extant to inform us of the fact, scenes of misery and distress—the aged, whose silver locks in other places and at other times would command reverence; the mother, who in other circumstances would be spared from violence; the infant, whose tender cries would be regarded and listened to with a feeling of compassion and tenderness; and the virgin, whose grace, beauty and modesty, would be esteemed and held inviolate by all good men and enlightened and civilized nations, alike disregarded and treated with scorn!—in vain did the hoary head and man of gray hairs ask for mercy; in vain did the mother plead for compassion; in vain did the helpless and harmless infant weep for verry anguish, and in vain did the virgin seek to escape the ruthless hand of revengeful foes and demons in human form—all alike were trampled down by the feet of the strong, and crushed beneath the rage of battle and war! Alas, who can reflect upon the last struggles of great and populous nations, sinking to dust beneath the <​hand of Justice and retribution without​> weeping over the corruptions of the human heart, and sighing for the hour when the clangor of arms shall no more be heard, nor the calamities of contending armies no more experience<​d​> for a thousand years? Alas, the calamities calamity of war, the extinction of nations,
124