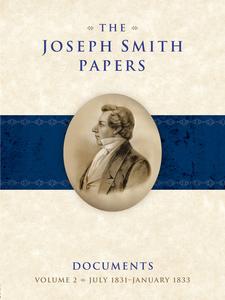 This second volume of the Documents series, published in 2013, contains revelations, correspondence, minutes of meetings in which Joseph Smith participated, and licenses provided to church officers. These documents chronicle administrative and doctrinal developments in the church, including the organization of the United Firm. Many of the documents trace the establishment of the city of Zion in Missouri and emphasize the importance of gathering to that area. The volume also contains two poignant letters from Joseph Smith to his wife Emma that give insights into Smith’s family life. ISBN-13: 978-1-60907-598-9

Matthew C. Godfrey and Mark Ashurst-McGee are historians for the Church History Department, The Church of Jesus Christ of Latter-day Saints. Grant Underwood is a professor of history at Brigham Young University. Robert J. Woodford is a retired instructor at the Latter-day Saint Institute of Religion at the University of Utah. William G. Hartley is an emeritus associate professor of history at Brigham Young University.

The second volume in the Documents series of The Joseph Smith Papers illuminates Joseph Smith’s life from July 1831 through January 1833. Covering a period in which Joseph Smith emphasized church record keeping, this volume contains revelations, correspondence, minutes of meetings in which Smith participated, and licenses provided to church officers. These documents allow readers to see both the administrative growth of the Church of Christ and Joseph Smith’s maturation as its leader.

On 20 July 1831, Joseph Smith dictated the revelation that opens this volume, a document stating that Jackson County, Missouri, would be the location of the city of Zion—the New Jerusalem to which God’s elect would be gathered in preparation for the second coming of Jesus Christ. The logistical and organizational challenges that arose as the city of Zion was developed play a prominent role in the volume. Documents in this volume record the establishment of new ecclesiastical offices to address those organizational difficulties, and they chart the rise of the United Firm, an administrative body in both Missouri and Ohio that was created to govern the church’s mercantile and publishing endeavors.

By presenting the texts of over forty of Joseph Smith’s revelations and visions, this volume also chronicles doctrinal developments in the church. These revelations were pronouncements in the voice of Deity that Smith’s followers accepted as God’s word, and their substance ranged from providing instruction for individual church members to issuing warnings to the earth’s inhabitants of the imminent disasters preceding Christ’s return. Some revelations unfolded stunning new doctrines, including an account of the three kingdoms of heavenly glory awaiting God’s children and a detailed delineation of the two priesthoods God had bestowed on humankind. Others provided specific direction to church members on the establishment of the city of Zion in Missouri and emphasized the importance of gathering to that area. The revelations were considered so significant that church leaders decided in November 1831 to publish them as the Book of Commandments—a decision documented by several revelations and minutes in this volume.

But Joseph Smith was not only the leader of a religious movement. He was a man with a family and hopes and difficulties all his own. Included in this volume are two holograph letters from Joseph Smith to his wife Emma. These poignant letters depict a man who enjoyed the company of Emma and their daughter, Julia, who missed them when he was traveling, and who worried about their safety and well-being. The volume also contains a personal history that Joseph Smith began preparing in the summer of 1832, which recounts significant life events, including the appearance of heavenly messengers to him and his early attempts to translate the Book of Mormon. Other documents show Joseph Smith’s interactions with leaders in the church, including his frustration with Missouri leaders who questioned his leadership. These documents, which have been transcribed and annotated to the highest standards of documentary editing, foster a richer understanding of the complex life and nature of Joseph Smith during this early period.

Revelation Designated as the Preface to the Book of Commandments, 1 November 1831 [D&C 1]

I the Lord knowing the calamity which should come upon the inhabitants of the Earth called upon my Servent Joseph & spake unto him from heaven & gave him commandment & also gave commandments to others that they should proclaim these things unto the world & all this that it might be fulfilled which was written by the Prophets the weak things of the world should come forth & break down the mighty & strong ones that man should not council his fellow man neither trust in the arm of flesh but that every man might Speak in the name of God the Lord even the Saveiour of the world that faith also might increase in the Earth that mine everlasting Covenant might be established that the fullness of my Gospel might be proclaimed by the weak & the Simple unto the ends of the world & before kings & Rulers[.]

After beholding all that I had any desire to behold I returned to my room to meditate and calm my mind and behold the thaughts of home of Emma and Julia rushes upon my mind like a flood and I could wish for [a] moment to be with them my breast is filled with all the feelings and tenderness of a parent and a Husband and could I be with you I would tell you many things[.]

“Well researched, scrupulously proofread, and expertly annotated, these volumes, and this edition, will surely stand as the definitive one for many generations.”

“The volumes [of the Joseph Smith Papers] published thus far represent the high-water mark for LDS documentary editing. . . . The editors should be commended for their painstaking attention to detail and the overall quality of the publications.”

“This [Documents] series is where the ‘trickle down’ effect of the Papers in the hands of future historians and biographers will probably be most powerful. As has come to be expected, these volumes feature painstaking precision and a primary source focus. A fine achievement and a welcome addition to any library, either for a researcher or interested reader.”