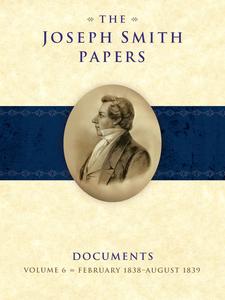 The sixth volume of the Documents series, published in September 2017, contains personal letters, revelations, discourses, minutes, legal documents, and financial documents, among other documents. The documents in the volume trace the establishment of Far West, Missouri, as the center place of Zion; the spread of Latter-day Saint settlements in northwestern Missouri; Joseph Smith’s incarceration in Clay County, Missouri; the Saints’ expulsion from the state; and initial efforts to establish church settlements in Illinois and in Iowa Territory. The documents highlight Smith’s continued efforts to remove dissension from the church, establish a city of Zion, protect the Saints from antagonists, and prepare the Quorum of the Twelve Apostles for a mission to Europe.

Fearing for his life, Joseph Smith fled Kirtland, Ohio, in January 1838 and traveled hundreds of miles to Far West, Missouri. Over the next year and a half, he sought to establish Far West as a city of Zion with a temple, was involved in armed conflict between the Latter-day Saints and other Missourians, was arrested and imprisoned, escaped custody and fled to Illinois, and helped establish new settlements in Illinois and Iowa Territory for the Saints. These events are covered in this sixth volume of the Documents series of The Joseph Smith Papers.

After arriving in Missouri in early 1838, Joseph Smith resettled his family in Far West, where the majority of Missouri Saints lived. During the next several months, he organized new settlements in the nearby towns of Adam-ondi-Ahman and De Witt in preparation for the Saints who were emigrating from Ohio and elsewhere. Smith’s efforts to establish the Saints in northwestern Missouri are manifest in revelations, minutes of meetings, and other documents included in this volume.

The growth of the Latter-day Saint population in Missouri caused resentment among earlier settlers and eventually led to conflict. In late October 1838, the governor of Missouri ordered the state militia to restore peace by subduing the Saints and expelling them from the state. In early November, the “Mormon War” concluded with the surrender of Far West, the arrest and imprisonment of Joseph Smith and several other church leaders, and the Saints’ agreement under duress to leave the state.

During the next half year, Joseph Smith was held in state custody, spending much of this time in the dungeon of the Clay County jailhouse. Meanwhile, thousands of Latter-day Saints began their forced evacuation from Missouri. Many suffered considerably during their winter journey to Illinois, where they sought refuge. While Smith was separated from the main body of Saints, he stayed informed of their plight and provided leadership through correspondence with family and friends and epistles to the church membership. These powerful and poignant letters are featured herein.

In April 1839, Joseph Smith and his fellow prisoners escaped from custody and reunited with their families and other Saints in western Illinois. Smith was determined to find a new place where his people could again gather, and he soon directed settlement to Commerce, Illinois, a swampy area along the Mississippi River. The church’s acquisition of this land is chronicled in letters, minutes, and financial documents included in the volume. Documents also describe the malaria epidemic that ravaged the refugee community that summer, hampering their efforts to settle the area and resume church affairs. Yet they pressed forward and laid the foundations of the city of Nauvoo.

The letters, minutes, revelations, and other texts presented in this volume provide essential documentation for this tumultuous period in Latter-day Saint history. The documents have been transcribed and annotated to the highest standards of documentary editing, making this volume an invaluable resource for those studying the life of Joseph Smith and the early history of the church he founded.

“I sat down just as the sun is going down, as we peak throu[gh] the greats of this lonesome prision, to write to you, that I may make known to you my situation. It is I believe it is now about five months and six days since I have bean under the grimace, of a guard night and day, and within the walls grates and screeking iron dors, of a lonesome dark durty prison. With immotions known only to God, do I write this letter, the contemplations, of the mind under these circumstances, defies the pen, or tounge, or Angels, to discribe, or paint, to the human being, who never experiance what we experience.”

“As has come to be expected with the JSP, Documents, Volume 6 is filled not only with crucial documents, but insightful commentary based on exhaustive research. The many introductions are supported with contextual documents that provide the casual reader with enough information to make sense of the sources and their environment. Historians of the era should feel encouraged to either purchase a copy or urge their libraries to do so, and teachers would be wise to assign the free digital versions of the documents in their courses.”

“Although it is nice to read the actual documents, what is really nice about these volumes are the historical essays and source notes that put them in context, and the annotations that explain each detail of what is encountered in the documents. I can only imagine the hours of research that must have gone into them. Although they are ostensibly intended mainly as a reference for historians, an interested reader can learn an extensive amount of church history from them.”

“As has been true in all of the previous volumes in The Joseph Smith Papers series, the scholarship and research involved in providing the context in the extensive, intricate, and detailed historical introductions and footnotes in this volume is top notch. . . . If you are into Joseph Smith studies, either for scholarly or devotional reasons, Joseph Smith Papers: Documents, Volume 6 is an essential book for your library.”

“This volume has the capability to shift not only how we narrate the Saints’ time in Missouri, but how we think about Mormon violence, as well as ideas about canon and revelation, and much, much more.”

“The cool narration and detailed annotation of the Missouri Mormon War is remarkably accessible and enlightening. The editors are truly pros­—honestly the best. You get frank and concise accounts of everything involved, from Mormon disenfranchisement to Danites. . . . D6 is a reminder of just how important and worthy of our attention these volumes are.”

“The editors have provided meticulous transcripts of vital documents from this turbulent period in Mormon history. The background explanations, identification of people, and other descriptions found in the document introductions and footnotes are informative, detailed, and objective in tone. The editors have also provided helpful explanations of the legal circumstances and issues surrounding the imprisonment of Joseph Smith and other Mormon leaders. In short, this volume provides excellent context to help readers understand the meaning and importance of the documents and surrounding events.”

—Stephen C. LeSueur, author of The 1838 Mormon War in Missouri