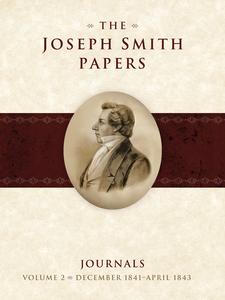 Volume 2 of the Journals series, published in 2011, features the first Nauvoo, Illinois, journal of Joseph Smith as well as part of the second, covering the seventeen months from December 1841 through April 1843. These journals chronicle such significant developments as the organization of the Female Relief Society of Nauvoo, proxy baptism for deceased persons, the publication of the Book of Abraham, the construction of the Nauvoo temple, the continued growth of the church and ongoing settlement of Nauvoo, and the maturing of Joseph Smith as a religious and political leader. The journals also detail the many challenges Joseph Smith faced during this period, including the agitation of dissenters such as John C. Bennett and an attempt by Missouri and Illinois officials to have Smith extradited to Missouri for trial. ISBN-13: 978-1-60908-737-1

Andrew H. Hedges and Alex D. Smith are his­torians for the Church History Department, The Church of Jesus Christ of Latter-day Saints. Richard Lloyd Anderson is a research historian and review editor for The Joseph Smith Papers and an emeritus professor of ancient scripture at Brigham Young University.

For those trying to understand Joseph Smith on his own terms, no amount of reading in the growing literature on Latter-day Saint history will ever replace a direct appeal to the documents he and his associates produced. Through such records, students of history are able to watch events unfold through the eyes of contemporary witnesses, and feel the ebb and flow of people’s everyday lives in ways that broader narratives and thematic studies largely miss. With their cancellations, misspellings, insertions, and other idiosyncrasies, such documents have the ability to transport careful readers through time and space to the very moment of inscription.

This volume of The Joseph Smith Papers features the first Nauvoo, Illinois, journal of Joseph Smith as well as part of the second, covering the seventeen months from December 1841 through April 1843. Like the first five of his journals previously published (Journals, Volume 1), these Nauvoo journals close the distance between modern readers and Smith’s life, thought, and personality. In addition, the events, teachings, revelations, ordinances, and organizational changes they help document constitute a significant contribution to foundational Latter-day Saint identity, beliefs, and practices.

Kept primarily by scribes Willard Richards and William Clayton, these journals chronicle such significant developments as the organization of the Female Relief Society of Nauvoo; proxy baptism for deceased persons; the publication of the Book of Abraham; the construction of the Nauvoo temple; the continued growth of the church and ongoing settlement of Nauvoo; and the maturing of Joseph Smith as a religious and political leader whose influence would extend far beyond the years of his life and the city he founded on the banks of the Mississippi River.

The journals also detail the many challenges Joseph Smith faced during this period. Dissenters like John C. Bennett, who misrepresented Smith’s teachings about plural marriage, and private de­velopers like Robert D. Foster, whose personal agendas competed with Smith’s efforts to build the temple and provide for the poor, caused him no end of trouble. At the same time, Joseph Smith was also accused of masterminding the 6 May 1842 assassination attempt on Lilburn W. Boggs, the former Missouri governor who ordered the removal of the Latter-day Saints from the state in 1838. This led to an attempt by Missouri and Illinois officials to have Smith arrested and extra­dited to Missouri for trial. Through the exertions of his friends and family Joseph Smith evaded cap­ture until Illinois federal district judge Nathaniel Pope declared the extradition attempt invalid in early January 1843. More pages and entries in Joseph Smith’s journal are devoted to aspects of this extradition attempt than to any other single topic.

The journals featured here have been tran­scribed, introduced, and annotated according to the highest standards of documentary editing. Originally created under the direction of Joseph Smith himself, they constitute an essential primary source for research into the life of the founding prophet of The Church of Jesus Christ of Latter-day Saints during one of the most dynamic peri­ods in the history of the faith.

“About 10 o clock this morning president Joseph rode up and viewed the Temple [in Nauvoo, Illinois]. He expressed his satisfaction at the arrangements made and was pleased [with] the prog­ress made in that sacred edifice. . . . Went over to the store where a number of brethren and sisters were assembled who had arrived this morning from the neighborhood of New York. . . . President Joseph spoke to them considerable, showing them the proper course to pursue and how to act in regard to making purchases of land &c. He showed them that it was generally in consequence of the brethren disobeying or disregarding council, that they became dissatisfied and murmered; and many when they arrived here were dissatisfied with the conduct of some of the saints because every thing was not done perfectly right, and they get mad and thus the devil gets advantage over them to destroy them. He said he was but a man and they must not expect him to be perfect; if they expected perfection from him, he should expect it from them, but if they would bear with his infirmities and the infirmities of the brethren, he would likewise bear with their infirmities.”

“The great value of the Journals series is not always in the daily entries themselves but in the outstanding work of the editors, who provide extensive additional information about what was going on. . . .

“Such editorial comments comprise the bulk of both volumes [Journals, vols. 2 and 3] and, together with the ability to see exact transcriptions of the original journals, make these volumes of exceptional value to students of history, whether professional or otherwise. . . .

“If the editors of these journals had gone no further than providing great transcriptions along with exceptional editorial work, these would be valuable and worthwhile publications. But they have gone further by adding important reference material that is of inestimable value to scholars and others seeking to know more about the Prophet and his experiences.”

“The editors of the volume have produced transcripts that scholars may rely upon with confidence. . . . Ancillary material included in the volume and on the Smith Papers website is outstanding and will serve as an essential reference library to scholars. . . . The examination of this volume revealed no reason to doubt that the editors have risen to the challenge and produced an unfiltered view of the documents left behind by the founders of the Church. In ways both subtle and immediately evident it is clear that the editing standards applied at the Smith Papers are forthright and rigorous.”

“The value of this volume lies in the journals themselves, the annotations, and the remaining scholarly apparatus. All reflect the resources and talent that the Church History Department continues to devote to this venture. . . . The chronology, outstanding maps, biographical directory, complex charts of church officers, and bibliography will all also be of great use to anyone active in Mormon Studies. Any instructor with students who might write research papers on Mormon topics should have their libraries buy the (not inexpensive) volumes of the JSP.”

“For a serious student of Joseph and his journals, the introductions to [the Book of the Law of the Lord] and the memorandum books alone are worth the price of admission. . . . The somewhat stricter transcription standards also ensure that anyone citing the journals is as close to the original as printably possible. The annotation, appendices and back matter are also extremely helpful in contextualizing Nauvoo events. Journals, vol. 2 is a worthy addition to this highest-quality series.”

“One of the lasting contributions of the JSPP generally will be their highly meticulous transcription process. . . . The depth of the editors’ familiarity with every imaginable feature of the journals and their context is really quite astonishing. . . . [The project has] a level of professionalized precision that flirts with the incredible. It includes generous reference materials documenting civil and religious leadership, biographical details and local cartography. Journals 2 maintains the highest standards of the project’s preceding releases, while incorporating the vast and complex available context of the Nauvoo period.”