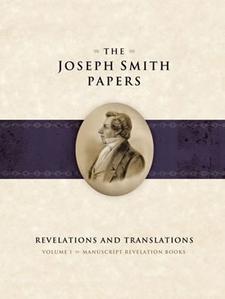 This volume of the Revelations and Translations series, published in 2011, presents the same textual transcripts and editorial material as the facsimile edition of the same volume but does not include the full-color photographs of each page of the revelation books. It is essentially a library edition, or a condensed edition, of its predecessor. The volume uses the same color scheme as the facsimile edition to present scribal changes made to the revelation texts and has the same page size as Journals, Volume 1 (seven by ten inches). ISBN-13: 978-1-60641-909-0

Joseph Smith understood how important his revelations were to the work in which he was engaged. He marveled at them, defended them, and ensured that many were recorded, copied, edited, and published. And he and his followers acted on them, often at great cost. When the revelations called for a new gathering place despite inadequate resources, they responded. When the revelations commanded a small community with little means to construct an impressive House of the Lord, they complied. Joseph Smith’s revelations restored, organized, and built The Church of Jesus Christ of Latter-day Saints and oriented thousands who converted to it in his lifetime and millions since.

Among the most important primary sources available for studying the composition and history of Joseph Smith’s revelations are Revelation Book 1 and Revelation Book 2, the documents featured in this volume. Each is a large manuscript book into which scores of early revelations were copied by early church leaders and scribes. These books preserve the earliest known copies of many revelations, including a few texts that exist nowhere else. The copies of other revelations found in these books, though not the earliest surviving copies, hold great value as alternative versions against which to compare when analyzing how carefully the texts were transmitted. Beyond this, because most of the texts in the manuscript books were edited and used as source texts when the revelations were published in the 1830s, the books are critical sources for understanding the process of publishing the early revelations.

Revelation Book 1, the spine of which is labeled “Book of Commandments and Revelations,” was begun less than a year after Joseph Smith organized the church. Though initially the volume was probably intended to be a record book for preserving revelation texts, it was later used as a copy text from which the revelations were published. Containing copies of more than one hundred revelations, it was the source text for multiple revelations published in the church’s first newspaper in 1832 and 1833 and in the canonical compilation titled Book of Commandments (1833). Later, church officers assigned to publish the updated compilation known as the Doctrine and Covenants (1835) drew in part on Revelation Book 1 as a source text.

Revelation Book 2, which is titled “Book of Revelations” and has often been known as the Kirtland Revelation Book, was begun in early 1832. Containing about fifty copied revelations, this manuscript book was an important source text for the 1835 Doctrine and Covenants.

Designed for those who wish to research the early texts of Joseph Smith’s revelations and efforts to publish them, the transcripts in this volume reproduce the original manuscripts of these books with great care, preserving corrections and revisions of any kind, line breaks, and the location of interlinear insertions. Since several scribes penned revisions in these manuscripts, the handwriting of each is rendered in a different color to facilitate analysis.

Beyond their value as resources for careful study of the texts, the revelation books by their very existence demonstrate the importance that Joseph Smith and other early Latter-day Saints placed upon their sacred documents. These books affirm their commitment to create and preserve sacred texts to document their dealings with God.

“[B]ehold you have been intrusted with those things but how strict were your commandments & Remember also the Promises which were made to you if you did not transgress them & behold how oft you have transgressed these commandments and the Laws of God & have gone on in the Persuasions of men for behold you should not have feared man more then God although men set at naught the councils of God & dispise his words yet you should have been faithful & he would have extended his arm & supported you against all the firey darts of the advisary & he would have been with you in evry time of trouble behold thou art Joseph & thou wast chosen to do the work of the Lord but because of transgression if thou art not aware thou wilt fall but remember God is merciful therefore repent of that which thou hast done & he will only cause thee to be afflicted for a season & thou art still chosen & will again be called to the work[.]”

“[T]he Lord touched the eyes of our understandings and they were opened and the glory of the lord shone round about and we beheld the glory of the son on the right of the Father and received of his fulness and saw the holy Angels and they who are sanctified before his throne worshiping God and the lamb who worship him for ever and ever and now after the many testamonies which have been given of him this is the testamony last of all which we give of him that he lives for we saw him, even on the right hand of God & we heard the voice bearing reccord that he is the only begotten of the Father that by him and through him and of him the worlds are and were created and the inhabitants thereof are begotten sons and daughters unto God[.]”