Revelations and Translations, Volume 3: Printer’s Manuscript of the Book of Mormon 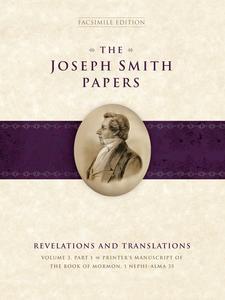 Royal Skousen is a professor of linguistics at Brigham Young University and editor of the Book of Mormon Critical Text Project. Robin Scott Jensen is a historian for the Church History Department, The Church of Jesus Christ of Latter-day Saints.

The Book of Mormon is the centerpiece of Joseph Smith’s documentary record. It served to Smith’s followers as a witness of his divine mission and as a foundation of their newfound faith. This volume, the third in the Revelations and Translations series of The Joseph Smith Papers, gives readers unprecedented access to an early Book of Mormon manuscript through full-color photographs, a color-coded transcript, introductions, and reference material.

From early April to late June 1829, Joseph Smith dictated the extant text of the Book of Mormon. He and other believers explained that Smith translated the Book of Mormon from writings on ancient metal plates to which Smith had been led by a heavenly messenger. Smith’s translation of the plates was not the conventional process of converting text from one language to another through expert knowledge of both languages—instead, he recounted that he dictated the text “by the gift and power of God.” With the aid of “interpreters” he found buried with the plates and a seer stone already in his possession, Joseph Smith dictated the text to at least seven different scribes. The manuscript they created is known as the original manuscript. Because of significant water damage suffered in the nineteenth century, less than 30 percent of the original manuscript has survived. Most of it is held by the Church History Library of The Church of Jesus Christ of Latter-day Saints, Salt Lake City.

After the original manuscript was completed and Joseph Smith had secured the services of a printer, Smith directed that a second copy, now known as the printer’s manuscript, be created. This would allow the original manuscript to be kept safe while the second copy was taken to the print shop. Oliver Cowdery, Hyrum Smith, and a third, unknown scribe created the printer’s manuscript from roughly August 1829 to January 1830, and pages of it were taken in batches to E. B. Grandin’s print shop in Palmyra, New York, as composition and printing proceeded. The first edition of the Book of Mormon went on sale in Palmyra on March 26, 1830, and Smith formally organized a church less than two weeks later. The printer’s manuscript was consulted again by Joseph Smith and others when the second edition of the Book of Mormon was printed in 1837 in Kirtland, Ohio. The manuscript was eventually obtained by the Reorganized Church of Jesus Christ of Latter Day Saints (now Community of Christ), headquartered in Independence, Missouri. The carefully preserved manuscript is virtually complete—only three lines of text are missing.

This volume of The Joseph Smith Papers provides a facsimile edition of the printer’s manuscript of the Book of Mormon. Designed for those who wish to carefully research the early text of the Book of Mormon and efforts to publish that book, the transcript in this volume reproduces the printer’s manuscript exactly as it appears today. The transcript preserves corrections and revisions of any kind, line and page breaks, and even the locations of interlinear insertions. Since several scribes penned revisions in this manuscript, the handwriting of each is rendered in a different color to facilitate analysis. The photographs included here—the first complete photographic record of the printer’s manuscript ever published—allows comparison with the transcript and provides detail that can never be fully captured in transcription.

“Skousen and Jensen’s editorial work on these two facsimile volumes of the printer’s manuscript offer both scholars and lay readers alike wonderfully researched and beautifully executed volumes that make accessible each page of the handwritten manuscript that served as the source text for the earliest printed volumes of the Book of Mormon. . . . These types of scholarly volumes make such manuscript pages (with vitally informative marginal commentary) accessible to a wider readership, a readership that reaches far beyond the specialist scholars who most often have sole access to such delicate and treasured archival material. In this sense, facsimile editions such as these volumes are a move toward democratizing knowledge, and there are few textual projects that make this move as well as The Joseph Smith Papers.”

“All of the volumes in the Joseph Smith Papers series are beautifully presented, with important photographic and excellent typographic versions of the texts. . . . These volumes are an essential resource, and are both more elegant and ultimately more usable than Skousen’s previous transcriptions, which were until now the most important resource for scholars interested in the text of the Printer’s Manuscript.”

“As any textual scholar is well aware, no study on these grounds [the Book of Mormon] can proceed very far without rigorously produced base texts. Thus, publication of the latest volume in the Joseph Smith Papers series—‘Revelations and Translations, Volume 3: Printer’s Manuscript of the Book of Mormon’—is a very welcome development. . . . As befits the flagship project of Mormon history, this eleventh volume in the Joseph Smith Papers is a jewel of painstaking textual scrutiny and attention to detail.”

“The newest volume in the Revelations and Translations series of the Joseph Smith Papers (JSP) follows the high level of quality that has come to be expected of the JSP in both the quality craftsmanship of the hardcover book itself and the contents on each page. This volume in particular is exciting for those interested in studying Mormonism for either an academic or devotional perspective (or both). . . . This new volume complements and strengthens the other volumes already published in the series, and gives me great hope for the future volumes yet to come out.”

“Anyone seriously interested in [Book of Mormon] history must be delighted with this important addition to the Joseph Smith Papers, which for the first time makes the printer’s manuscript of the Book of Mormon available, both in print and online, to anyone. . . . [T]he editors clearly have done a marvelous job of rendering a text that reflects the original as closely as possible. . . . I cannot help but comment again on the incredible nature of the Joseph Smith Papers Project as a whole, and especially in this case, what it provides online.”