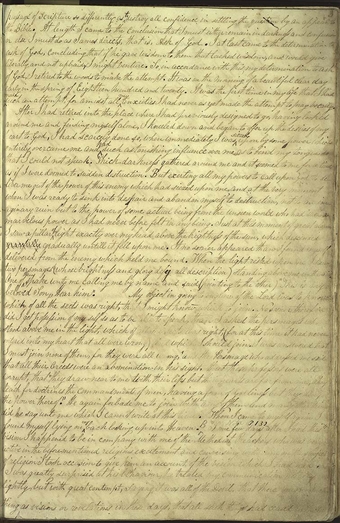 passage of Scripture so differently as <​to​> destroy all confidence in settling the question by an appeal to the Bible. At length I came to the conclusion that I must either remain in darkness and confusion or else I must do as James directs, that is, Ask of God. I at last came to the determination to ask of God, concluding that if he gave wisdom to them that lacked wisdom, and would give liberally and not upbraid, I might venture. So in accordance with this my determination to ask of God, I retired to the woods to make [HC 1:4] the attempt. It was on the morning of a beautiful clear day early in the spring of Eightteen hundred and twenty. It was the first time in my life that I had <​made​> such an attempt, for amidst all <​my​> anxieties I had never as yet made the attempt to pray vocally.
After I had retired into the place where I had previously designed to go, having looked around me and finding myself alone, I kneeled down and began to offer up the desires of my heart to God, I had scarcely done so, when immediately I was <​siezed​> upon by some power which entirely overcame me and <​had​> such astonishing influence over me as to bind my tongue so that I could not speak. Thick darkness gathered around me and it seemed to me for a time as if I were doomed to sudden destruction. But exerting all my powers to call upon God to deliver me out of the power of this enemy which had siezed upon me, and at the very moment when I was ready to sink into despair and abandon myself to destruction, not to an imaginary ruin but to the power of some actual being from the unseen world who had such a marvelous power as I had never before felt in any being. Just at this moment of great alarm I saw a pillar <​of​> light exactly over my head above the brightness of the sun, which descended gracefully gradually untill it fell upon me. It no sooner appeared than I found myself delivered from the enemy which held me bound. When the light rested upon me I saw two personages (whose brightness and glory defy all description) standing above me in the air. One of <​them​> spake unto me calling me by name and said (pointing to the other) “This is my beloved Son, Hear him.” My object in going to enquire of the Lord was to know which of all the sects was right, that I might know which to join. No sooner therefore did I get [HC 1:5] possession of myself so as to be able to speak, than I asked the personages who stood above me in the light, which of all the sects was right, (for at this time it had never entered into my heart that all were wrong) and which I should join. I was answered that I must join none of them, for they were all wrong, and the Personage who addressed me said that all their Creeds were an abomination in his sight, that those professors were all corrupt, that “they draw near to me to with their lips but their hearts are far from me, They teach for doctrines the commandments of men, having a form of Godliness but they deny the power thereof.” He again forbade me to join with any of them and many other thing[s]
9

did he say unto me which I cannot write at this time. When I came to myself again I found myself lying on <​my​> back looking up into Heaven. <​B see Note P 132​>
10